I am naturally organized. It’s one of my superpowers.

As a toddler, my parents once found me methodically pulling clean diapers out of their box, lining them up along the wall in the hallway, and then placing all of my stuffed animals in a diaper, one by one. As a pre-teen, I would empty my big container of collected pennies and line them up on the carpet in order of their year. Now, I take great satisfaction in a well-constructed Excel spreadsheet, and even my writing talismans on my desk-side table sit in a specific arrangement. I moderate Crucial Minutiae’s comments without second thought, and took deep satisfaction from re-organizing the weekly columns.

When I started meeting professional writers in my early 20s, I noticed that many of them, especially the most commercially successful ones, were naturally disorganized. They are brilliant writers and thinkers who, when they go deep into the writing process, seem to lose all sense of their physical world.

END_OF_DOCUMENT_TOKEN_TO_BE_REPLACED

Filed under Art, Beauty in a Wicked World, Writing

Talk about 180 degrees from my enraged post on Sunday! These tiny items are more adorable than beautiful, but the human imagination involved in making them is very much so. They’re Tiny Knitted Things, designed and made by Anna Hrachovec, a knitter who lives in New York.

My favorites are the bats; since moving to Austin, I’ve become quite fond of stuffed toy bats. 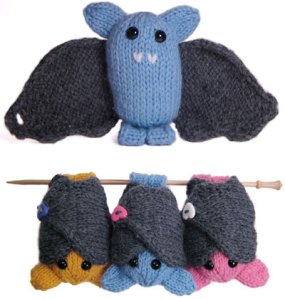 Comments Off on Tiny Knitted Things

9/9/09, huh? It’s an exciting day! It marks the last set of repeating, single-digit dates that we’ll see for almost a century (until January 1, 2101), and the Remastered Beatles catalog, Beatles Rock Band, and the new Apple iPod are all being released today.

But my favorite celebration today is my third wedding anniversary with the extraordinary Christopher Gandin Le. Suicide prevention expert, exquisite photographer (still and motion pictures), beloved friend, and the best damn husband and partner I could ever desire.

For our anniversary, he gave me the gift of music from one of my favorite artists: Erin McKeown. Since I first heard Distillation 9 years ago, I have loved this woman’s music, and have had a total crush on her as well. She’s excruciatingly talented across a wide variety of instruments and musical styles, her lyrics are poetic, her style is fantastic (check those Fluevogs!), and her live show is always fabulous. Oh, and she’s only 31; she’s been making great music since she was in college.

Her newest album, Hundreds of Lions, comes out this October on Righteous Babe records, and to raise funds for this self-financed album, she launched a very cool endeavor this summer.

END_OF_DOCUMENT_TOKEN_TO_BE_REPLACED

Sand Animation from the Ukraine

I’ve never seen anyone tell a story in this medium. I am so impressed by human ingenuity. Watching this skillful artist is worth 8 minutes of your life.

Filed under Art, Beauty in a Wicked World, Relationships, Theater

It’s been a busy week. From writing and shooting a three-minute PSA for a film competition to battling squash vine borers in our garden, almost every waking minute has been accounted for.

This afternoon, looking for writing practice prompts, I discovered a quick way to find visual inspiration: the Flickr search engine. I just searched for “blue” in everyone’s uploads on Flickr, and got pages and pages of beautiful images, from barn walls to butterflies. I’ve also searched for “kitten,” “peace,” “feta,” and “America.” Try it, and see how long it takes you to find an image that moves you.

Filed under Art, Beauty in a Wicked World, Writing

An Open Letter from a Female Director

via Ekwa MO and Melissa Silverstein

Ela Thier, a director and filmmaker for 20 years, wrote this letter about her experience in the film industry as a woman. It’s four pages of pure passion, focused specifically on fundraising for her new project, but it speaks to so much more than simple donation dollars. For example:

After years of learning, practicing, and teaching, after years of query letters, phone calls, meetings, film markets, panels, classes, LA trips, networking, more networking, even more networking, my scripts – those ones that this market reader liked better than the 150 scripts she read that summer – those scripts sit on a shelf. After years of trying and falling and getting up and trying, something finally dawned on me: maybe I’m not the most unlucky bastard that ever lived. Maybe I’m female.

There is no petition to draft. There is no policy to fight. Yet, of the 250 top-grossing films in any given year, 6% are directed by women; of the 50 top-grossing movies each year, roughly 5 star or focus on women. In 80 years of Oscar history, with roughly 250 directors receiving a nomination for best director, 3 nominations went to female directors. No woman director ever received an Oscar.

It would be so much easier if someone would just flat out say it: “You’re not a director. You’re a girl.”

As a screenwriter and aspiring filmmaker with my own taste of the industry, I often fight feelings of defeat and depression when I read statistics like this. It would be simplistic to blame all of the slow movement or rejections in my career on my being a woman; I know it’s more complicated than that. But I do wonder, what if I’d put the name “J. Gandin Le” or “J.G. Le” on the title pages of my scripts instead of “Jennifer”? And I’m a young, white, straight, middle-class woman who’s worked with a legendary filmmaker. I melt into a useless puddle when when I think of the challenges or downright refusals that women of color, transgendered people, lesbians, or poor women must face.

So I give major applause to Ela Thier for resisting that instinct to lose hope, for fighting, for putting her anger and frustration into such eloquent words, and for vowing to work 20 times harder if it means her work will make it into the world.

Read the full letter below the cut.

END_OF_DOCUMENT_TOKEN_TO_BE_REPLACED

On Monday, President Obama officially proclaimed June 2009 as Lesbian, Gay, Bisexual, and Transgender Pride Month. This made my jaw drop and my heart soar. Yes, there is much more work to be done to truly “turn back discrimination and prejudice everywhere it exists,” as Obama asks Americans to do. But formal acknowledgments are a big deal in our country, and this is definitely an important first.

On a fluffier note, check out this re-recording of “Total Eclipse of the Heart,” with the vocalist singing/narrating what’s actually happening in the video (which is, by the way, completely creepy). Clever and hilarious!

Crucial Minutiae – The Archives
Create a free website or blog at WordPress.com.